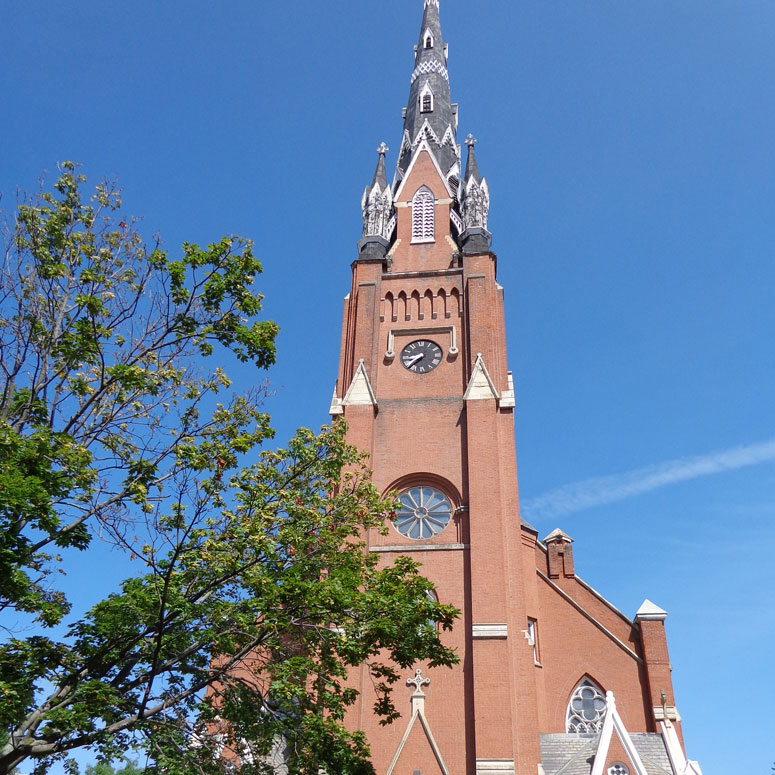 An effort to preserve and revitalize a cornerstone of Dubuque history now has a name and firm business plan.

A coalition of Dubuque business and community leaders has finalized the name and proposed site plan for a planned update to the St. Mary’s Church campus. The historic church will be transformed into apartments and a community center, as well as office, retail and green space.

The project, dubbed Steeple Square, lacks a definitive timeline and price tag. However, John Schmidt, vice president of Friends of St. Mary’s board of directors, expects “some pounding of hammers” in late summer or fall.

He provided a rough $10 million estimate to develop the campus. Project leaders likely will seek tax credits that would lower the cost.

Dick Gregory, a member of the nonprofit organization’s board of directors, said the group already has raised a substantial amount of money. He said he anticipates an announcement in June with more details and the launch of a public fundraising campaign.

Gregory said the organization also has identified “numerous state and federal resources,” along with foundations that support historic preservation and some of the campus’ planned services. “We are very early in the process, but are seeing great success,” he said.

The Catholic parish was closed by the Dubuque Archdiocese in 2010. The campus remained dormant until the Friends of St. Mary’s and archdiocese officials announced plans in January 2014 to renew the parish’s legacy of community enrichment.

The group held meetings last fall to inform residents about the project and solicit ideas for how best to utilize the campus.

A proposed site plan calls for renovating the church into an event center offering child care and culinary, cultural, educational and outreach programming.

The Jackson Street school would be transformed into a mix of two- and three-bedroom rental units. Some units would be set aside for homeless women and their children seeking permanent housing while still desiring services provided by Maria House/Open Doors.

Rectory offices would be converted into offices, meeting rooms and space for area nonprofits.

Gregory said the group has letters of interest from continuing education and day care providers as well as a coffee shop and retailers.

Gronen Restoration has been retained as project manager.

Schmidt said he sees the campus and 150-year-old church becoming a downtown hub and catalyst for citizen engagement, neighborhood empowerment and community vibrancy.

The Rev. Msgr. Thomas Toale, Friends of St. Mary’s board member and vicar general for the archdiocese, could not be reached for comment Friday.