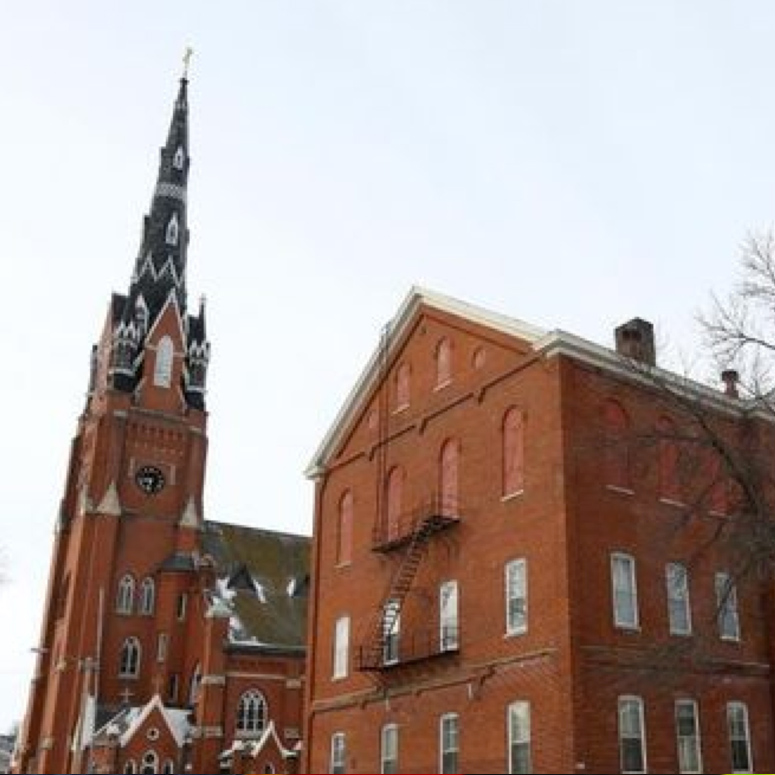 Renovation efforts at a historic Dubuque church campus were bolstered this week when the project was awarded $600,000 through the Jeffris Family Foundation.
The grant will be used for the Steeple Square project, which will transform the former St. Mary’s Catholic Church campus at 15th and White streets.

But the money comes with a catch: Before project leaders can use the grant funds, they are required to raise double the award amount — $1.2 million — on their own.

“I have yet to have anyone say, ‘Why are you doing that?’ It’s always been a lot of support,” said Jack McCullough, chairman of the Steeple Square board of directors. “There’s one word that comes out of everybody’s mouths when they visit, especially if they haven’t been to the church before: ‘Wow.’”

The Janesville, Wis.-based Jeffris Foundation focuses on preserving and restoring historic sites throughout the Midwest. It has provided grants for several regional restoration projects, including the Potosi Brewery in Potosi, Wis.

“I’m a great admirer of Dubuque’s preservation efforts,” said Tom Jeffris, president of the Jeffris Family Foundation. “I think it’s one of the great architectural centers of the United States, and I’ve been to most of them.”

Jeffris said the architectural plan for the church’s restoration was one of the best he had seen in his time as president of the foundation.

While the entire church will undergo renovations, the grant from the Jeffris Foundation will only be used for a fraction of the preservation efforts.

“The grant will be specifically for the steeple itself,” McCullough said. “A new roof will be part of that, and they’ll rebuild all of the spire — everything from head to toe.”

Other Steeple Square restoration efforts at the church will include replicating the front doors that were part of the church during both World Wars, as well as continued work on the stained-glass windows and exterior masonry.

Project leaders also plan to convert the old St. Mary’s school building into an apartment complex for Opening Doors, the nonprofit that runs the Maria House and the Teresa Shelter. The church itself will be transformed into an event center, while the rectory will be renovated into offices for nonprofits.

Duane Hagerty, a Steeple Square board member, it will take around $15 million to restore the church campus, which was placed on the National Register of Historic Places in 2015.

“We’ve identified major donors and we hope they will contribute to the match of the tower and steeple project,” said Hagerty, CEO of the nonprofit Heritage Works. “That’s the most important and defining characteristic of the church.”

Steeple Square will begin working on the apartment complex this summer. Hagerty said they hope to begin fundraising for the tower and steeple project immediately so work can begin in the spring of 2017.

“(That) will coincide well with the 150th anniversary of the 1867 completion of the church,” Hagerty said