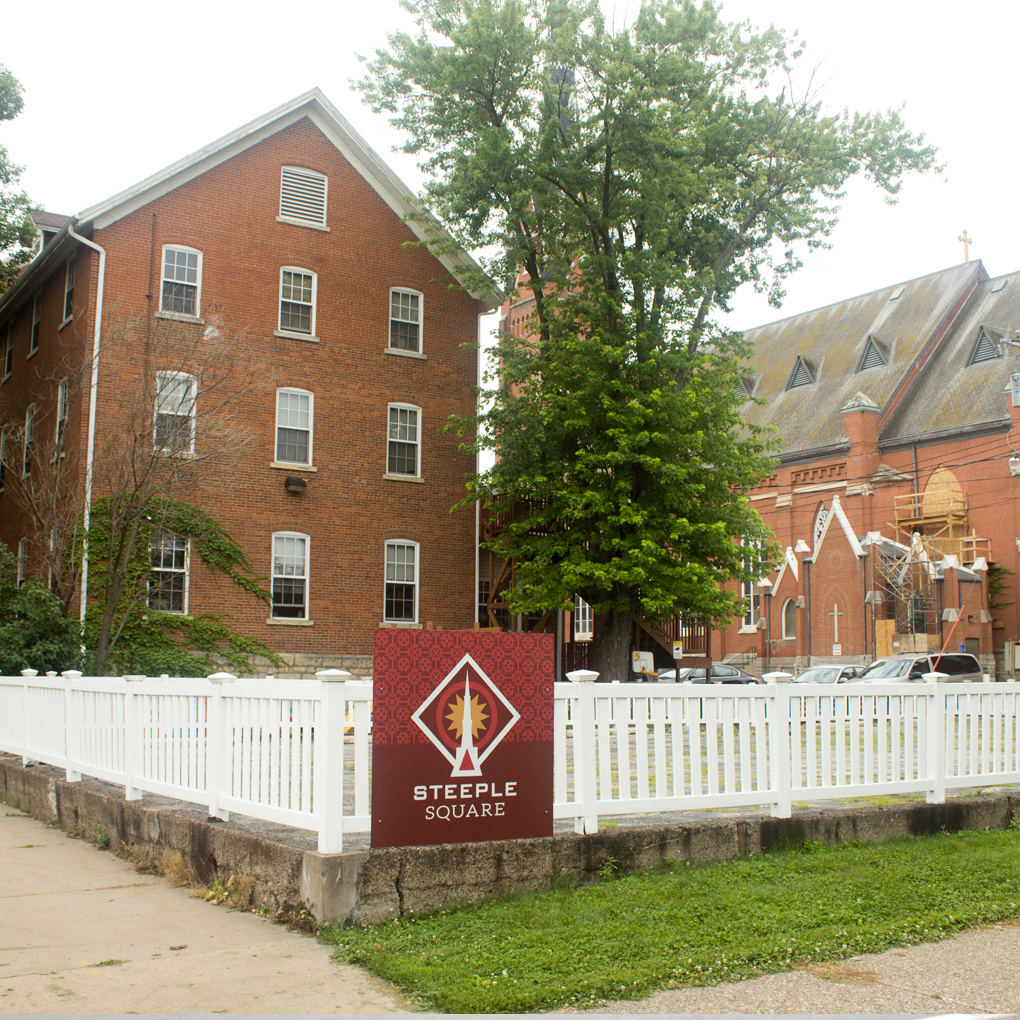 A once-vigorous block of buildings, mostly now dark and shuttered, could become a lively focal point of community life once again if resources fall into place.

Plans are coalescing for the rebirth of the area known as the St. Mary Church Campus, bordered by White and Jackson streets and 15th and 16th streets. Venerable old buildings, each more than a century old, would be restored, renovated and repurposed into a dynamic mix of living, working, learning and playing spaces surrounded by lush green spaces.

The Telegraph Herald reports (http://bit.ly/1eg5L0n ) that every week for the past year, a disparate group of visionaries has met to study how to preserve the history and architecture of the structures and create a vibrant social hub for the Washington

Neighborhood and the broader community. The Friends of St. Mary’s, which numbered several hundred at times, includes representatives from the business, financial, civic, religious, arts and social service sectors. They are unveiling plans for three of the campus buildings – the fourth, the former Franciscan convent that houses the Maria House and offices of Opening Doors, would remain as is.

“A wide range of folks has been studying this, hoping to create a ‘community’ place that will influence all of Dubuque life,” said Monsignor Tom Toale, vicar general of the Dubuque Archdiocese.

The three buildings are owned by St. Mary’s Church Corp. Like every Catholic parish, a corporation was formed at its beginning. The St. Mary’s entity no longer offers religious services since the church closed four years ago, but it continues overseeing the “temporal goods” – assets, liabilities, facilities – of the former parish.

Examining detailed building plans on display in the church sanctuary, A.Y. McDonald chief financial officer John Schmidt agreed that this project is more than just finding a new use for St. Mary’s.

“It’s a bigger issue than just the campus. This will have a much broader impact on the community,” he said. “If we go through the trouble of preserving all of this, it must be welcoming and inclusive of everyone, a viable community epicenter.”

Dwarfed by the Gothic Revival church’s vaulted ceilings, archways and columns, some core members of the Friends of St. Mary’s, including Toale and Schmidt, laid out their vision this week:

As someone who lives in the Washington Neighborhood and works on economic development for the city of Dubuque, Megan Starr is doubly interested in the multi-year, multi-faceted project.

“This is a microcosm for redevelopment of the neighborhood and it’s value-added to me as a resident,” she said. “I can see me stopping in several times each day – for a cup of coffee, to stroll through the gardens, to take a culinary class at night.”

Michelle Brown, executive director of Opening Doors, is excited about the proposals on several levels.

“We’ve watched these buildings close one by one, inviting crime and blight. People are reluctant to drive into the neighborhood now. I’d love to see this area people-centered again,” she said.

Brown explained why the school will be renovated into apartments for women with children, especially families that “graduate” from the Maria House, a transitional shelter for women and children.

“There is a great need for affordable housing for women with children. Most are working minimum-wage jobs and can’t keep their apartments, so they cycle in and out of shelters,” she said. “We have identified so many families who would flourish in this setting.”

The families would share staff, support services and a new, large playground with Maria House residents.

Dubuque developer John Gronen is confident the proposed projects can be completed in a timely manner and that funding for them can be raised from three main sources – grants, tax credits and philanthropy. The group is not ready to estimate project costs until some further prices are pinned down, but there is widespread interest in supporting the proposals, Toale said.

“From the point when the funding is secured, we can finish a project in 16 months,” said Gronen, who has spearheaded numerous historic preservation projects in Dubuque’s downtown.

One party was interested in buying the church building to tear it down. The St. Mary Church Corp. would not consider that option.

“This has to be preserved,” Gronen said, looking around at the rich artistic decorations on nearly every surface of the church interior. “When this was built, the parish hired some of the best people in the world to create all of this artwork.”

Chicago historic preservation consultant Duane Hagerty has done hundreds of hours of research at the St. Mary’s campus over the past three years. “My jaw just dropped the first time I stepped into the church,” he said. “The common misconception is that these buildings are in terrible condition, but actually they are in good shape. They were built to last forever, and their bones are solid.”

The church alone was built using more than 2 million bricks, he said. Hagerty, who grew up near Bankston, Iowa, stressed the importance of the St. Mary Church steeple, the highest in Dubuque at 252 feet. After several feet of pigeon and bat droppings are removed from its interior, the graceful steeple will be restored.

“Imagine how it towered over Dubuque in the 1860s, when it was a prairie town. It has always been a prominent point on the Dubuque cityscape,” he said. “It would be missed terribly if it disappeared.”

Plans are to light the steeple once again as the church is being restored.