In Dubuque, Stained Glass Opens Window to Past and Future 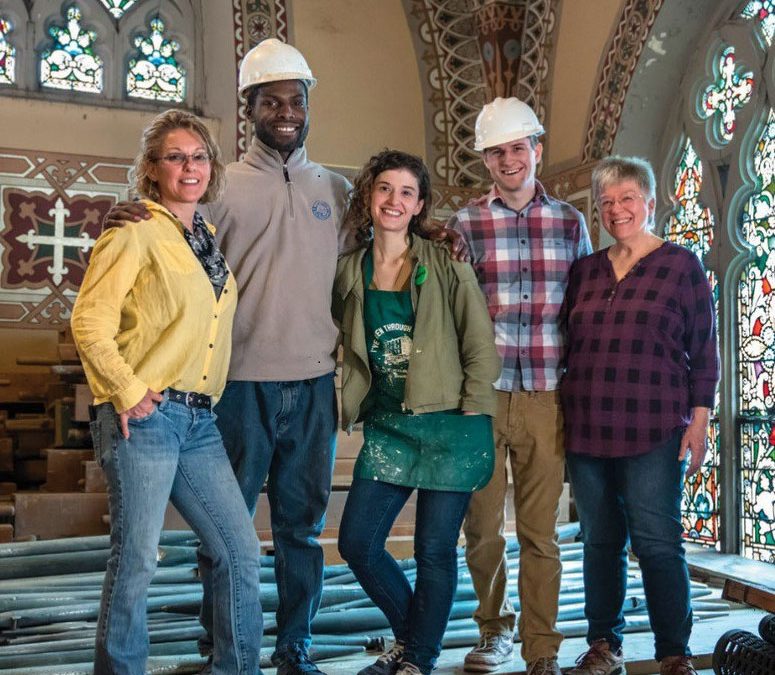 Sometimes opportunity knocks. Other times, it slides in through the windows.

When a Dubuque parish moved out of St. Mary’s Catholic Church in 2010, the community turned the cluster of church buildings into a community center known as Steeple Square. In the process, they also restored the old church’s stained-glass windows and trained a new generation of local artisans.

“Anybody can do it, anybody who has the passion and the time and the patience,” said Adam Schwendinger, whose Steeple Square training prompted him to leave a job in food service and jump full-time into historic preservation.

He’ll share Steeple Square’s success story — and his own — during the annual Preserve Iowa Summit online June 4–6. This year’s statewide conference for historic-preservation professionals and volunteers will be presented online by the city of Dubuque and the State Historic Preservation Office, a division of the Iowa Department of Cultural Affairs.

Generations of Dubuque’s faithful have attended baptisms, weddings and funerals amid the glow of St. Mary’s stained-glass windows, ever since they were installed in the 1910s. The F.X. Zettler Studios in Munich, Germany, designed them to fit in the window frames that were part of the original Gothic Revival structure that German immigrants built in the 1860s.

When the parish finally moved out, a local historic-preservation nonprofit called Heritage Works led the charge to save the old brick buildings.

“A lot of people were emotionally invested in repurposing those buildings so people could hang on to those memories and those experiences and pass them on to the kids and grandkids,” Heritage Works President and CEO Duane Hagerty said.

In the summer of 2015, Hagerty invited a Chicago preservationist named Mark Radina to restore two of the church windows with some of his students from the Art Institute of Chicago. The students learned how to clean the old glass and replace the lead that held the panels together. They also repaired the window frames, which had deteriorated from decades of exposure to the elements.

Radina returned the following summer to restore a few more windows with help from local trainees. The Steeple Square board recruited locals with creative skills — painters, photographers, architects — as well as folks with low-paying jobs who could use some new opportunities.

“Mostly it’s just cleaning, but some of the windows are in worse shape, so we have to re-lead them,” said Tim Olson, one of the original trainees who now leads workshops of his own.

To date, Heritage Works and its trainees have restored 33 of Steeple Square’s windows, or about 75 percent of the site’s stained glass.

Hagerty estimates that Steeple Square has injected more than $13 million into the local economy since the redevelopment project began in 2015. The former church rectory is now a daycare center. The old church school is now a mix of market-rate and low-income apartments. Neighbors are fixing up their own properties in the area.

The early German immigrants who built St. Mary’s are long gone, but the towering landmark they built still plays a big role in the community. Its redevelopment has restored more than bricks and mortar and glass.