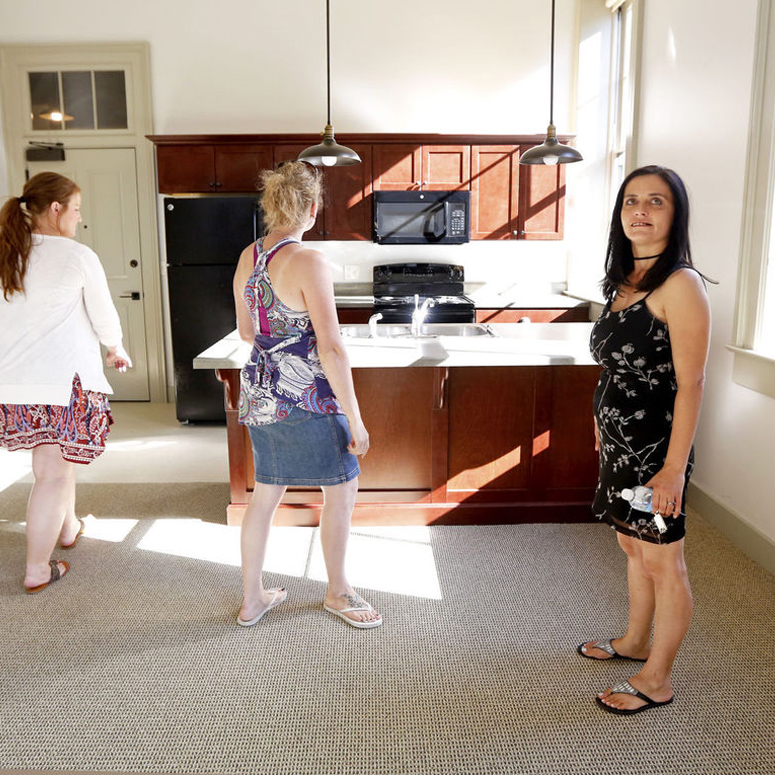 Amy McFarland’s life was at a low point.

It was March 2016 and she had just been arrested on drug charges for the second time in 14 months. That’s when she found Opening Doors’ Maria House through a drug court program.

Now, after 490 days of sobriety, a lot of tears, a lot of hugs and more than a year of employment, McFarland is moving into her new apartment.

McFarland, 39, from Dubuque, is one of eight Maria House graduates who will move into the newly renovated Francis Apartments. The project formerly was known as the apartments at Steeple Square.

Maria House is a program that provides transitional housing and programs to help women learn to be independent.

The new dwellings are a result of the four-year-old collaboration between the leadership of Steeple Square and Opening Doors.

“It’s been a lot of hard work put in by a lot of people to make this happen,” said Michelle Brown, executive director of Opening Doors. “It’s people like Amy who have made a commitment to better their lives that make it worth it.”

The school building now boasts a dozen two- and three-bedroom apartments, eight of which will be occupied by Maria House graduates like Amy at a rate subsidized by Opening Doors. The other four apartments are available for rent to the public at market rates.

The apartments were dedicated Thursday night in honor of the women religious in the tri-state area, founders of Opening Doors.

“The neat thing is if someone is married, this is the first time we have the opportunity to help an entire family,” said Ann Lorenz, Opening Doors marketing director.

Dubuque Mayor Roy Buol said the Francis Apartments are another way to provide opportunities for those who might not have had many.

“Creating the opportunities for our citizens through such great partnerships is what we should be all about,” he said.

Lorenz said, “These women aren’t just handed these apartments. They have to prove they want to better their situation in life and be willing to work toward it.”

McFarland said she couldn’t be more grateful for the help and support Opening Doors has provided her.

McFarland said she hopes everyone realizes there’s no situation too bad to dig yourself out from.

“I just want people to know that no matter how low you are — and I’ve been low — there’s always a way out,” she said. “Just look at me.”