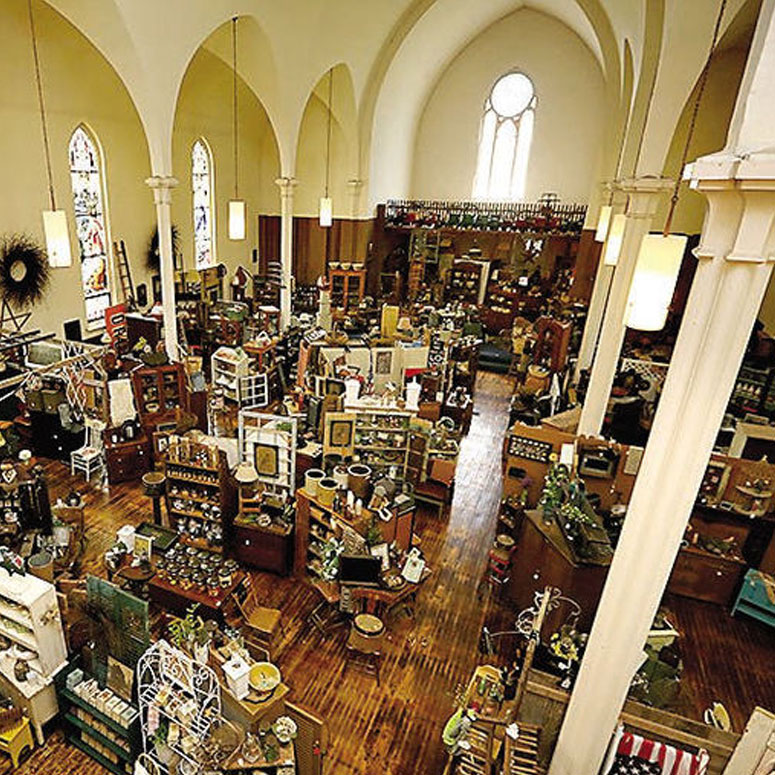 As Dubuque business and community leaders prepare to launch the Steeple Square renovation to the historic St. Mary’s Church campus in Dubuque, TH Media visited other business owners in neighboring communities who have found new uses for old churches.

Holy Mackerel
In Elizabeth, Ill., a neon blue and pink light depicting a fish hangs on the front wall inside a small church building.

Master Chef Dan Kretschmer serves up an array of steak and seafood entrees Thursday through Sunday nights at Holy Mackerel.

Kretschmer sports a slim white beard and colorful gauge in one ear. His attitude and his food are no-nonsense.

The food is sauteed or baked — never fried. The restaurant is open from 5 p.m. until close — a promise to his customers that he won’t kick them out, he said.

Kretschmer opened the restaurant in the former Presbyterian Church six years ago. A sign in the back of the former sanctuary proudly proclaims the year in which the church was built: 1875.

Kretschmer has been in the restaurant business for 50 years. His career began at the Playboy Club in Lake Geneva, Wis.

It was the stained glass that first drew Kretschmer’s attention to the small Elizabeth church. The simple white china resting on the tables softly reflected the pink, green and yellow hues of the glass as he spoke.

“Atmosphere to me is No. 1,” he said. “Atmosphere, a good, stiff drink and a good waitress or server.”

Today, his family makes up most of his crew. His wife, Denise, bakes all the desserts, including the top-selling cranberry white chocolate pecan bread pudding with bourbon sauce.

Annie’s Treasures
In Cascade, Iowa, the steps into an old Catholic church sport furniture and decor pieces — mere glimpses of the antiques that can be found inside.

The Cascade native attended the church as a child. She had just run out of space in her downtown shop when a coalition of community members formed to preserve the church, which closed in 2002.

Fagan has sold items to customers from as far away as Minnesota and Colorado. Her favorite part of the job is the hunt, she said.

“I love finding things for people when they’re looking for stuff,” she said. “Good antique shops are getting fewer and fewer.”
The church that houses her wares was built in 1882. The stained glass windows feature German writing; the remaining Catholic church in Cascade was founded by the Irish, Fagan said.

Annie’s Treasures will host a fall open house from Sept. 8 to 14 in conjunction with Hollow Tree, The Pink Pig and The Quilting Tree.

The pair opened the salon and spa in August 2006. Prior to that, the building housed a wedding dress shop for more than 20 years.

Before becoming a dress shop, the building served as Asbury’s Methodist Church. Three church buildings actually were erected at the location on the corner of Radford and Asbury Roads. The current building was built in 1904, but it used bricks from the second building, built in 1871.

“The building itself has so much character,” Irwin said. “It lends itself to an open plan, with tall ceilings and a lot of natural sunlight.”

Irwin and Mueller and their families spent many late nights in the old church building while remodeling.

Many customers have shared stories about attending, being baptized or being married in the church, giving the business owners a chance to soak up history right away, she added.