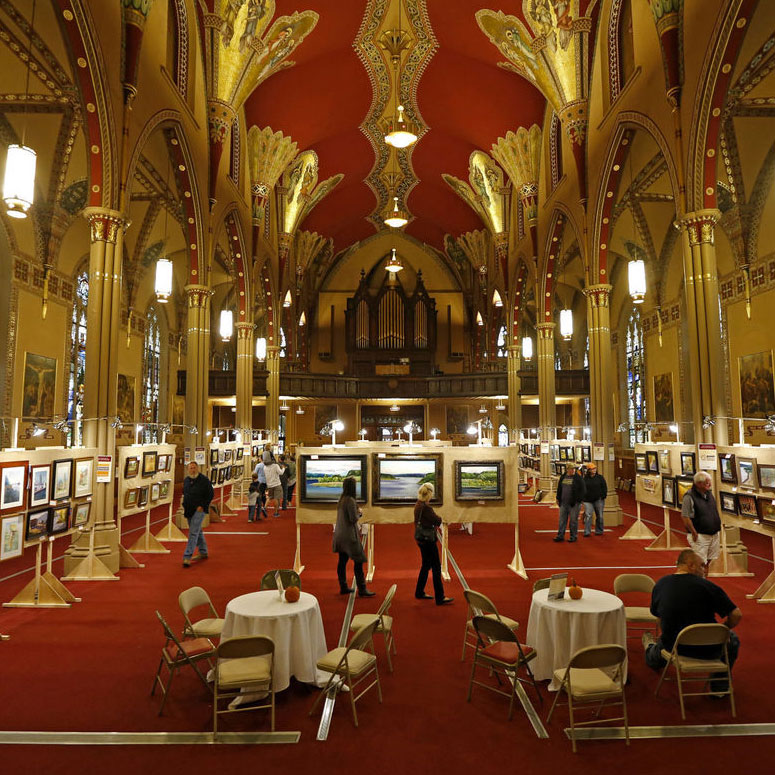 St. Mary’s Catholic Church was due for the wrecking ball after years of sitting vacant. But, the Friends of St. Mary’s saw the potential as an event space and wanted to preserve it.

Now, it is being used for weddings, concerts and arts events.

Character comes in the form of the outline of the pews along the walls and the mosaic on the wall near the area where the alter once stood.

Since it opened in February, more than 30 events have been hosted there.

“It’s just kind of been word of mouth,” Stowell said. “We are looking very nice for next year, with four or five weddings already booked.”

A peek inside the refurbished site

People always are curious about what is going on at the building. Open hours on Mondays allow people to come visit.

“When people walk in off the street, they come in the door, walk up and say, ‘Wow,’” said John Dunkel, member of Friends of St. Mary’s.

“They can’t believe how beautiful the space is.”

At a recent open house, people with ties to St. Mary’s were encouraged to see the space.

“There were people whose grandmothers got married here,” Stowell said. “They’re glad it’s being renovated as opposed to being torn down.”

Dunkel added, people were astounded by what was being done.

“Even old parishioners were in tears knowing the space is being used again,” he said.

One mission of Steeple Square is to use the space to better the neighborhood.

“A real important part of our mission is to interface with the community,” he said. “Within the neighborhood, we’re just seeing a nice change.”

The campus is set to be transformed, with the rectory becoming a day care center, and green space for outdoor events in between the church building, as well as what will become apartments and the Maria House.

In October, Steeple Square served as the site for the Bluff Strokes Plein Air Paint Out art gallery.

Wes Heitzman is chair of the Mississippi River Art Workshops, which hosted Bluff Strokes, and serves on the Steeple Square event planning committee. He said he chose Steeple Square as the venue because the aim was to create a unique experience for the visiting artists.

“The art in the building, particularly the stained glass, creates an impression of a place in which art is valued and venerated,” he said.

“The layout also lent itself well functionally, with a front greeting and sales area and plenty of space for artists to spread out for labeling and framing.”

Jillayne Pinchuk, chairwoman of the event, agreed with Heitzman about the space. She added the space complemented the artists’ work.

“Steeple Square will become a part of our branding to distinguish ours from others around the country,” Pinchuk said.

It also was the site of Handmade City, an independent craft fair. The event, which has been hosted in the Quad Cities and Des Moines, was hosted in Dubuque for the first time Nov. 19.

Rose Noble, creator of Handmade City, said Stowell encouraged her to look at Steeple Square as a location in August.

“I walked in and I was like, ‘I have to do something here,” Noble said. “I was blown away; it’s absolutely beautiful.”

Noble said while the first event was a test run, she sees potential in the space for future events.

“We could expand even more,” she said. “We could definitely add more vendors.”