Stained-Glass Windows Getting Touched Up at Former Dubuque Church 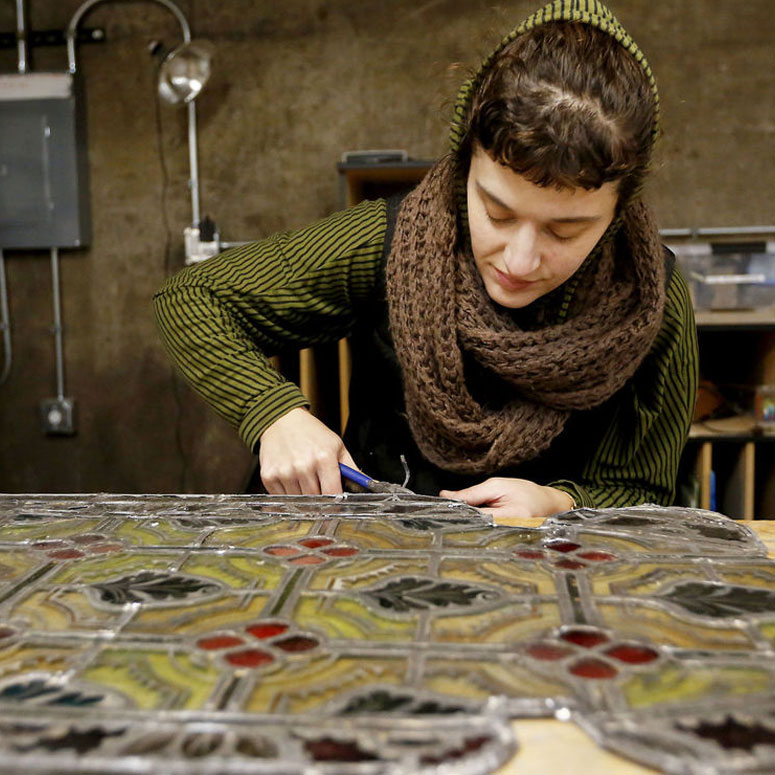 A group of experts is revitalizing stained-glass depictions of holy figures at a former Dubuque church.

With brushes and chisels, workers at Steeple Square have labored to give new life to Mary, mother of Jesus, and other saints adorning the windows of the former St. Mary’s Catholic Church.

“The stained-glass windows depict the major moments of Mary’s life,” said John Dunkel, a member of the Steeple Square Board of Directors. “They are a very important part of what makes the church so special.”

The former church campus now is home to Steeple Square, located at the intersection of 15th and White streets. Leaders of the nonprofit board have been working to revitalize the historic structure to create a community space, housing for low-income families and more.

Now, in partnership with several organizations, Steeple Square officials are working to have the century-old stained-glass windows cleaned and restored.

Work on the windows is being led by Heritage Works Dubuque. Duane Hagerty, CEO of Heritage Works, said a team of eight people has been working for seven weeks to repair two windows that sit above the side entrances, along with two larger side windows.

Hagerty said the project has enough funding to restore four additional side windows as well. Work likely will be completed in the spring.

The total funding for the project is $200,000, which comes from a combination of grants and personal donations.

The windows were placed in the church in 1916 as part of a massive renovation that began in 1912. But they’ve largely been untouched since then, accruing plenty of dirt and wear along the way.

“They are probably the most significant historical piece of the building,” Hagerty said. “They’re definitely worth preserving.”

Each window is removed from its frame and then soaked, cleaned, repaired and polished. Hagerty said the frames also will be repainted, but he noted that they are still in good shape, despite their age.

“They say that people don’t build things like they used to, and that’s absolutely true,” Hagerty said. “Those window frames will probably be good for another 100 years.”

Hagerty said he hopes to raise enough funding to eventually have all of the stained-glass windows restored.

For some, the project is an educational experience. Hagerty said three of the crew members had no prior experience in stained-glass window restoration and were brought on to learn about the practice.

“We want to give people the opportunity to learn preservation skills,” Hagerty said. “This project has allowed us to give them hands-on experience.”

Stedman Foster is one of the workers being introduced to the skill. He said he jumped at the opportunity to learn more about pieces of art he has always admired.

“I’ve always had a fascination with stained glass since I was a kid,” Foster said. “I never thought I’d get to work on it, but I’m really glad that I do.”

Foster said he has been fascinated to learn about the history of the church and the stained glass. He hopes the project can extend the life of the windows so future generations can appreciate them as much as he does.

“People from the future who want to learn about the past often don’t have enough pieces,” Foster said. “I think it’s important we try to preserve as much as we can.”