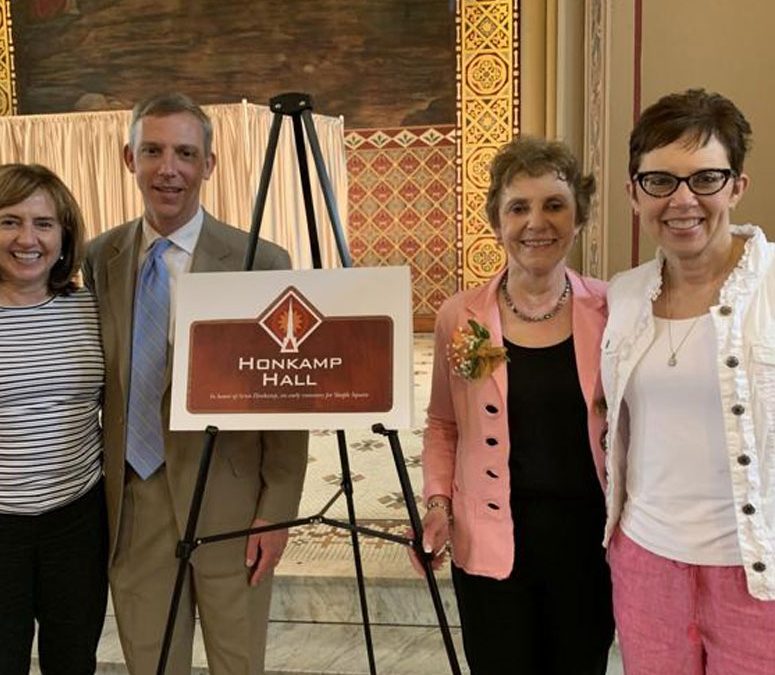 The family of Arnie Honkamp attended a private dedication ceremony in which Steeple Square officials named its community event center as Honkamp Hall.

Officials with Steeple Square recently named the campus’ community event center for one of its “founding board members and visionaries.”

The upper level of the former St. Mary’s Catholic Church in Dubuque has been named Honkamp Hall, in honor of the late Arnie Honkamp, according to a press release. Honkamp died on Jan. 4, 2014.

“Arnie Honkamp was instrumental in establishing the vision for Steeple Square, and his family and friends provided generous support for the project,” said Steeple Square Treasurer Judy Wolf in the release.

Steeple Square officials and the Honkamp family held a private dedication ceremony over the weekend.

“Arnie would be immensely pleased and quite humble about it,” said his wife, Joyce, in the release. “ … His time with the project was so short, but I’m sure he would have jumped in full barrel. He was a Dubuquer to the core and anything that would enhance Dubuque, he was all for it and there for it.”

The hall can be rented for community events, and tours are available upon request. For more information, call 563-235-3584 or email events@steeplesquare.com.